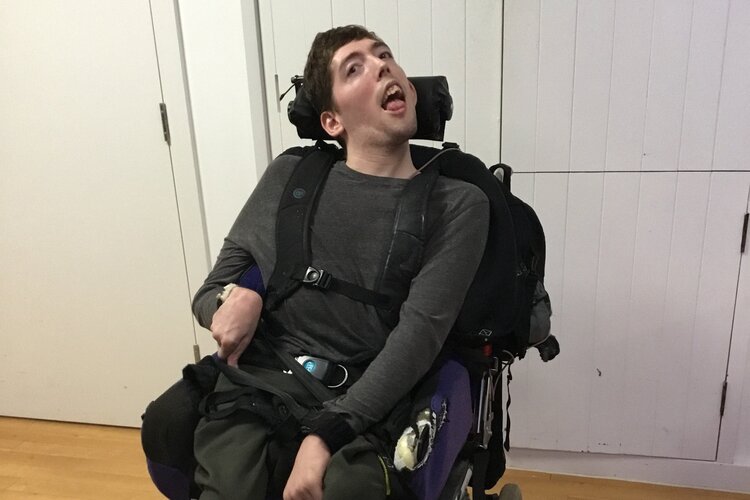 An inspiring young man James Aston age 27 has been recognised as one of the UK’s leaders of tomorrow. James has cerebral palsy and is a wheelchair user, who despite having no voice, successfully manages to convey his thoughts and ideas using only his eyes for ‘yes’ and ‘no’, together with a symbol book that his carers point to. In spite of these barriers he makes a significant impact challenging inequalities that affect young people with disabilities.

James lives at Aurora’s Orchard Manor residential service for young people with disabilities in Meldreth, a village in South Cambridgeshire. He has been recognised as one of Tomorrow’s Leaders by the Education and Training Foundation and The Council for Disabled Children.

James used to enjoy spending time with family and friends at Essex County Cricket Club but as he got older this became impossible due to a lack of changing facilities. 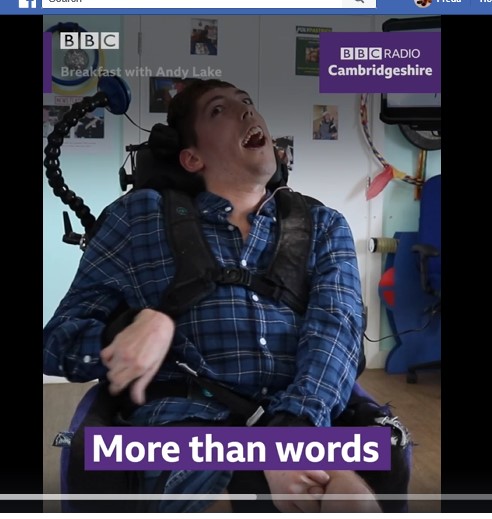 He raised this subject in a chance meeting with Graham Gooch (ex-England and Essex cricket team captain) who acknowledged that the club should be accessible to all. Subsequently mobile changing places did become available.

Locally James has shared a presentation with the Speak Out advocacy council about the lack of accessible public transport in the area. He also visited Addenbrooke’s Hospital to give feedback about the user-friendliness of their services. He identified that food outlets were difficult for wheelchair users to reach, the food was not appropriate for those on a blended diet and that there were inadequate changing facilities.

James’ strong spirit influences those around him. He has come up with many ideas to make life more fun and interesting for his peers, noticing what they might need and suggesting activities for them to participate in. These have included a sensory Halloween party, talent competitions based on TV shows and many more. He has also instigated several successful enterprises including a temporary tattoo parlour, a takeaway pastry outlet and a mini shop to raise money for projects and charities, most recently a polytunnel for the service where he lives. These projects provide opportunities for young people with disabilities to take part in the local community and develop life-skills.

James aspires to live a normal life and challenges any notion that he shouldn’t. He wants people to see that just because he can’t speak, it does not mean he is unable to understand or contribute. James indicated how proud he felt to be in the magazine and to have been recognised for his work. When asked what he would like to do in the future, he indicated that he wanted to earn money for his ideas.  A big fan of Simon Cowell, he would love to judge a talent competition on TV for people with disabilities and get paid for it!

“We are all immensely proud of James. He is a valued member of our community and his pioneering spirit has helped him achieve great things. We have supported James with his campaigns and are delighted that he has received national recognition for his achievements.”

“James is an excellent example of how Orchard Manor nurtures all the young people in its care and encourages them to follow their dreams.”